At just 34 years of age, Paul Fink suffered a massive stroke. He spent almost two weeks in a coma, and the prognosis for his recovery was bleak, with a very strong possibility that he would never speak or walk again, nor manage to live independently. Eight years on, however, Paul has stories to share of 10k walks, hosting a podcast, and ongoing recovery with the support of speech pathologists, occupational therapists and physiotherapists.

We caught up with Paul to hear his story and discuss the multidisciplinary treatment involved in his recovery.

Tell us a bit about your story—how did your stroke impact you, your family, your work, or others close to you?

“Mine is possibly an unusual stroke story. Stroke is more common with older people, but I was young, and had no indications or warning signs like high blood pressure. I was a fit, healthy, 34 year old new father, working full-time in IT. I was at home with my wife Lauren on a Friday morning, we were getting ready for work when I felt a sudden intense headache. My memory from this point is vague; I remember paramedics arriving, but I passed out within 30 minutes. I can’t remember two weeks in coma; I can’t remember three brain surgeries, or the ICU ward. I was paralysed on my right side, and my speech was absolutely zero, I had global aphasia.”

Paul suffered a haemorrhagic stroke called arteriovenous malformation or AVM. It’s a congenital condition that Paul had no awareness of at the time, described by his doctors as a ticking time bomb.

Paul feels grateful for missing the acute stages that followed the AVM—he feels he was spared trauma. He acknowledges that for his family and friends, however—particularly his wife and seven-month-old baby Oscar—it was a different story.

The early days were marked by confusion. Paul says he was essentially ‘absent’, heavily medicated, and the long-term quality of life outlook was heartbreaking. Paul was in hospital for 6 months following the stroke. The main motivation in this period of recovery was his family, especially his son Oscar.

Tell us about your recovery experience

“Luckily, I had a ‘left-side stroke’ which means my personality didn’t change. I’m a very positive person and never thought ‘Damn, I had a stroke’. I accepted that this happened, that I can’t change it, so I tried to focus on the things that I could change, like improving my speech and my physical condition.”

Paul elaborates on his goal-focused recovery: “I had three main priorities in rehab: speech, OT and physiotherapy. I always liked physical stuff, so doing physio was almost second nature to me and I could see improvements with my paralysis reasonably quickly, like walking after four months; I could see the progress. OT [occupational therapy] was a different experience—my hand still isn’t fully functional. It’s improved but it’s a very slow process.”

And then there’s speech. Paul explained that the AVM was centred in the speech area of his brain, so his speech was totally affected. He still has aphasia now but not globally. “Speech is a funny thing. I honestly can’t tell if I’m improving my speech or not. Obviously there’s a big difference between now and eight years ago but I can’t physically tell if its progressing. I rely on feedback from my speech therapists, friends, family. It’s really helpful to hear comments about my progress, positive and negative.

“My speech was pretty shocking in the early stages. I imagine the speech therapist was thinking ‘where do you start?’ In the first five weeks at the Alfred Hospital, I was using picture boards and body language to communicate, I wasn’t speaking at all.

“I basically needed to start again, using mouth exercises to retrain the ABC, sounding out the letters, like A=Ah, B=Beh… it was a very weird concept initially, it’s still confusing now! My speech therapist would complain that English is a terrible language to learn, but after starting rehab, with my long-term memory intact, I managed to pick up English again pretty quickly. Still, I was very confused joining words to sentences, my speech was missing words, possibly still missing words now, I can’t tell.”

Paul considers himself lucky that in his pre-stroke life, he worked in IT—this background helped him to use a range of technologies to his advantage for communication. “It started with using emojis as I was struggling to write text messages, then predictive text. Now I mainly use ‘speech to text’ with some editing on my part.” Speech pathologists also helped to identify suitable apps like Tactus to support Paul’s speech exercises.

Paul says he can’t fault the multidisciplinary allied health team he worked with; there was a therapeutic continuity amongst the allied health professionals he worked with, aligned with Paul’s recovery goals. He enjoyed a good working relationship with his therapists, in part due to his own level of motivation: “Therapists love motivated patients – it was a win-win.” He continued out-patient therapy ten months after discharge and is still keen to maximise the available ongoing support, ranging from stints of speech therapy to OT, and now neurological physiotherapy at Melbourne’s Epworth hospital.

Paul’s motivation to continue improving is reflected by the timeline on his website, learning to run again, driving, climbing the Sydney Harbour Bridge and stepping up to the podium as a host of public speaking engagements. 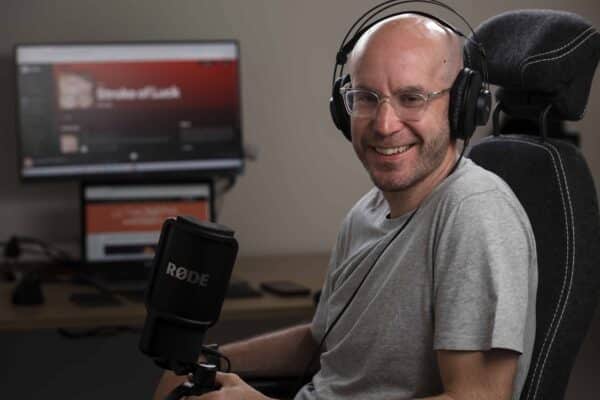 Is there any feedback you can offer to health care professionals supporting people in similar circumstances?

“My experience was 95% great, but with hindsight there were some minor issues. My first day at the rehab hospital, I wasn’t aware of the expectations, of the process—these things were poorly communicated to myself and Lauren. When we arrived, I was sent straight to my first OT session, a group session. I was used to physio with a background of sports therapy, but OT was so foreign and strange to me. There were lots of gadgets. I was still very confused at this stage, and I was wondering ‘what is that? Why is that here?’ It was very frustrating and overwhelming. I left the session early, both of us crying. We gave this feedback to the hospital, basically suggesting not to use OT group therapy as a first session, and the importance of talking about what patients can expect, in advance. I was lucky that Lauren is a physiotherapist so she knew all the medical jargon and could advocate for me, but clear communication with patients is really important.

“Also, never predict what the patient is thinking. In the early days of my rehabilitation, I was really in a confused state internally, but it wasn’t obvious. I was having a hidden experience of confusion, and with my personality of putting on a brave face, like ‘nothing to see here, I’m fine’, it was really important for the healthcare professionals to check in, ask ‘do you understand?’ Don’t make assumptions that patients understand what’s expected of them, understanding was a huge part of the recovery process, especially with speech. With my aphasia, my understanding was lacking, I struggled with verbal cues and instructions, so checking in and finding different ways to communicate is really helpful.”

Tell us about your ‘Stroke of Luck’ podcast – how did the idea come to you? Has focusing on it, developing content for it, presenting it, had any therapeutic benefit?

“Yes, it was very much a therapeutic process! Two or three years ago I was doing speech therapy at Caulfield hospital, and my therapist was a big fan of podcasts. Back then, I wasn’t listening to podcasts much, but my speech therapist said ‘Paul, your public speaking is good therapy, but extend yourself more, what about starting a podcast?’ I was hesitant. I’ve always been a softly spoken person, not at all outlandish, so I wasn’t sure. But my speech therapist pointed out that producing a podcast would tick lots of boxes for improving speech and understanding. I eventually said yes but there was a lot to work out. What type of podcast? Would it be all about stroke? Of course I was interested in stroke stuff, but I was interested in other stories too.

“We resolved to start a podcast on overcoming adversity. It’s a general topic, and almost every person has a story about overcoming adversity, minor or major. The aims of podcast were to improve my speech and raise awareness of aphasia and stroke. It was a great mini project with my speech therapists. I had help from a few friends on technical stuff. It was lots of work: researching guests, developing questions, conducting the interview, preparing to asking questions off the cuff. It was perfect brain training with every episode. We tried to target high profile guests, to reach a wider audience trying to maximise awareness of stroke and aphasia. I was pretty nervous but excited. I needed to be efficient in my interviews, do a professional job, especially working with time-poor high-profile people. I reached my goals for improving my speech and raising awareness, I’m pretty proud of it. I hope to produce more episodes—in theory it will get easier the more I do—but it’s also a big effort and there are other considerations, physical considerations like sitting down a lot at the computer, my muscles and joints are inactive and get stiff, so I need to find a balance.”

Aside from hosting his Stroke of Luck podcast, Paul is committed to sharing his story and raising awareness of aphasia and stroke through public speaking engagements and his website. He’s now a father of three young boys and even though he hasn’t been able to return to work yet, he’s grateful for the extra time he’s able to spend with his family, and that his rehabilitation efforts have allowed him to return to life as a hands-on dad.

Full details about Paul Fink’s story, recovery timeline, public speaking engagements, podcast and contact information can be found on his website iampaulfink. We highly recommend his podcast Stroke Of Luck, which you can subscribe to here.